A Brief History of the School

“Life is not a Brief Candle . It is a splendid Torch that should be made to glow as brightly as possible before handing it on to the future Generation”. Education is the means to achieve this end - a tool that helps to kindle and brighten this flame of life.

Education is a manifestation of perfection already in man, it kindles and brightens the soul of life. With this great missionary concept, the Sindhi Educational Society founded Sindhi Model School in 1975 with 42 children on its rolls. The brain child of the Society has now grown into a citadel of learning, with a student strength of more than 2000 with 91 teachers. The school aims at all round personality development with deep roots in culture, patriotism, devotion, duty, discipline, character and conduct.

The School was inaugurated by the then Governor of Tamil Nadu, Shri K K Shah in 1975 at Harleys Road, Kilpauk. At its inception, the school started functioning with Nursery Sections and Classes I to V, which was upgraded with an inclusion of next three classes by the academic year 1976 -1977.

The School was accorded the recognition and affiliation by the CBSE and was elevated to a Senior Secondary School from the academic year 1980 -1981. It is worth mentioning here that our school has been permanently affiliated to the CBSE in April 1987, the most coveted and prestigious status – enjoyed by a very few schools in India. It is a much sought after premier school in Southern Region.

The dedicated work of our late founder Chairman, Shri Keshavdas J. Jashani, brought the school to limelight within a short span of 10 years. After the demise of the Chairman, Shri Keshavdas J. Jashani, Shri Lachmandas Khushiram took over the reins. Under his unassuming, enthusiastic and proactive leadership the school witnessed renaissance. Multifarious activities have been introduced in the school in consonance with the healthy and progressive trends in the society. After the demise of Shri Lachmandas Khushiram, Shri Nandlal Pokardas, an eminent entrepreneur, banker and philanthropist took over as Chairman in the month of June 2009 who has been associated with the Sindhi Educational Society for over 3 decades. The young and dynamic Secretary, Shri Daneshkumar N. Chhabria plays an active role in the welfare and prosperity of the school. The unassuming founder Treasurer, Shri Devidas Jethanand continues to hold the office with ease and sincerity till date. Shri Rajalal Nirchani and Shri Suresh Chhabrai are aslo on board , contributing significantly to the progress of the school.

Sindhi Model School started functioning under the eminent stewardship ofDr. Kulapathi Shri S. Balakrishna Joshi, as the Founder Principal. Smt. Arundhathi Mohan had a long inning of more than 30 years and retired as Principal on 30.4.2007. In between years, Prof. Nageshwara Rao and U. Bhaskar Rau had short stint as Principals. Shri T M J Padmanabhan, (Ph.D) took over as Principal on 1.5.2007 and served the school till 31.3.2011. He has been associated to our school since 1988. Under him the school has benefitted immensely. He has brought in several reforms. He was open to ideas and readily implemented procedures that were deemed par excellence. Shri Abdul Raheem, M.Sc., M.Ed., served as Principal from 1.4.2011 to 30-04-2016.

Dr. T.M.J. Padmanabhan has taken over as principal once again after his return from England and completion of his research work. He has taken charge from 1-05-2016. He has a team of dedicated, sincere and well qualified graduate and Post graduate teachers. This premier institution is much sought after in Southern Region.

With the aspiration and focus on extensive services in the field of education, the Sindhi Community established the Sindhi College under the banner of Sindhi Educational Society in 1991 at Thiruverkadu. The College is offering many modern courses of study for the urban as well as the suburban populace of the city of Chennai. Another enhancement as their contribution in this sphere is on the anvil, ie., one more school at Nowroji Road, Chetput, Chennai. After the official formalities are over the school will be inaugurated and dedicated to the Public. As of now the entire school building is ready.

The benevolent Sindhi Community is running many philanthropic institutions as well to serve the downtrodden section of the society.

Infra-structure of the School

In a Metropolitan city where there is a paucity of land, the school is well provided not only with spacious and well furnished classrooms, but also a good vast play ground for the children to play and have Physical Education Training.

The school has richly equipped Science Laboratories for Physics, Chemistry, Biology and Mathematics for the students to explore and acquire knowledge. These Laboratories are used extensively by the Primary classes also which help to reinforce their classroom learning. The school has two Computer Laboratories, Audio Visual Room, Indoor Stage and Open Air Auditorium, aesthetically designed and elegantly executed by eminent architects.

Mathematics Laboratory is provided to make the learning process simpler and it helps to introduce play way methods and enables the children to get over the ‘fear psychosis’ for Mathematics.

Special Auditorium for Indoor Games like Table Tennis, Chess and Carrom. Students are given training by Coaches who play at State/National Level. Basket Ball Court also has been provided with International specifications.

The philanthropic and humanitarian Sindhi Management believes that education is not the monopoly of ‘Haves’ alone. Hence from the beginning they have started a scholarship fund for the pupils of our school who deserve encouragement and support. It is a Merit-cum-Means Scholarship.

Young minds learn better and faster. Therefore, an awareness of the social responsibilities, importance of fruits and vegetables and above all, the family binding is being created in the minds of the kindergarten kids, through a series of programmes like the Family Day, School Day, Fruits & Vegetables Day, Animals Day, Halloween’s Day etc., are conducted by the Nursery Department. Various festivals are celebrated by the students, in a traditional way, to make children understand the importance and values of our culture and traditions.

The landscaped new Nursery Park with waterfalls, wonderful flowers, ferns, palm trees and crotons not only adding scenic beauty but is also providing rich greenery to the premises. The imported play equipments are designed to provide safe entertainment to the bubbling tiny tots.

The results of Class X & XII CBSE Examination have always been meritorious and our school has been securing outstanding and cent per cent pass both in class X and XII Board exams from the time of inception. The students who pass out of Class XII gain admission into various popular Professional Colleges and are well placed in India and abroad. There is a mini Sindhi Model School in U.S.A!

The results of Class X & XII CBSE Examination have always been meritorious and our school has been securing outstanding and cent per cent pass both in class X and XII Board exams from the time of inception. The students who pass out of Class XII gain admission into various popular Professional Colleges and are well placed in India and abroad. There is a mini Sindhi Model School in U.S.A!

Welcome to Sindhi Group of Schools 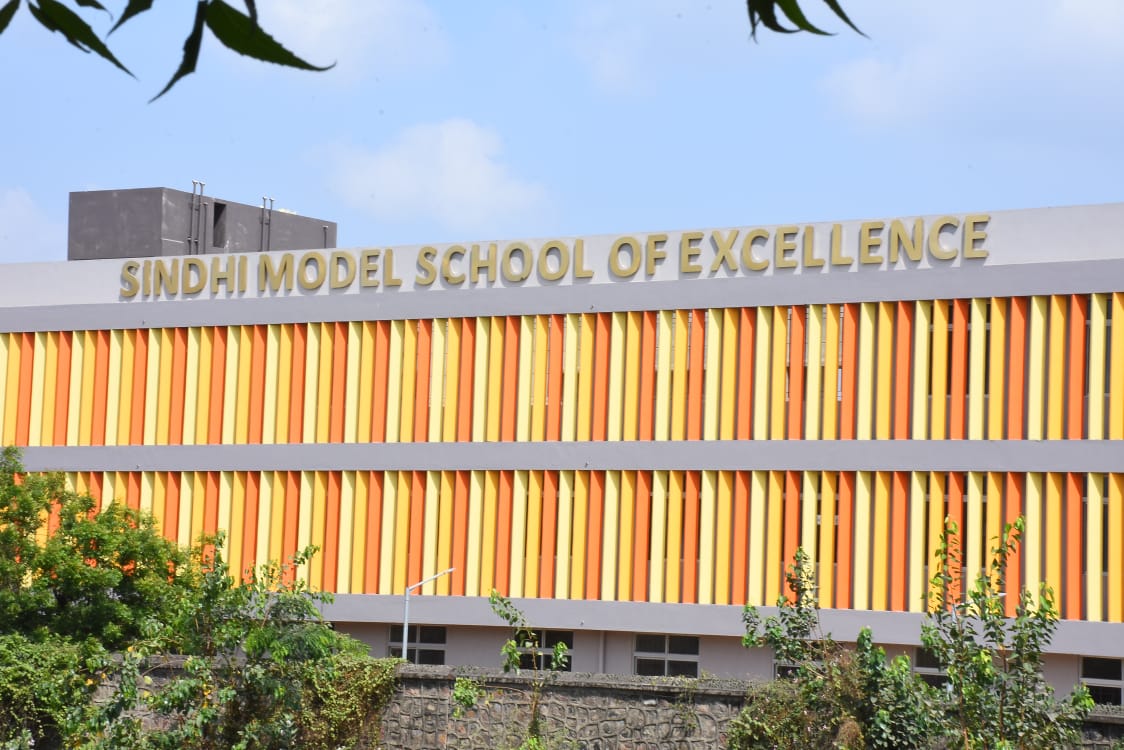 “Life is not a Brief Candle . It is a splendid Torch that should be made to glow as brightly as possible before handing it on to the future Generation”. Education is the means to achieve this end - a tool that helps to kindle and brighten this flame of life.